Step 5 – The Purpose of Prototypes

Prototyping is the Design Verification phase of Product Development because it demonstrates or proves the design.  Think of a Prototype as simply taking a design from the virtual, imaginary realm into the physical world.

Of course there are lots of reasons we want to touch and feel and try our new widget, and a prototype is the way to do that.  But, there are some specific reasons to prototype.  Some of the most common are:

Prototypes typically fit in these three categories:  1. Looks Like;  2. Acts Like;  3. Concepts to Test (Proof of Principle).  You can think of these as Form and/or Function.  Basically, there are prototypes that look and feel complete (but may not actually function); then prototypes that function properly (though just cobbled together).  And, prototypes for testing just a portion of the whole concept.  Of course, there are the combination versions that both Look right and Function correctly.  Those are usually the finals.

With the concepts of “Functional” and “Display” (form) types in mind, there are many levels of Prototypes:

And, there are many more.  All of these reach to a specific goal.  So, whatever reasons for building one, choose a prototype (and a prototyping process) to fit the purpose.  Let your project or needed tests determine which is right — especially since prototyping often comes with a significant cost.

For more on this topic with examples, please see “Why Do We Make Prototypes?“

Traditional prototyping methods include mock-ups (clay, wood or other), fabrication, and of course, the infamous “bailing wire and duct tape”.  More modern methods include CNC and rapid prototyping (like 3D Printing, SLA, SLS and many more).  Mock-ups are typically early in the design for visualization, feel, and to allow adjustments or fiddling with shape and size.  Fabricated prototypes are typically functional versions that may or may not look like the final product but give the opportunity to test function, improve action, or prove that something works (or doesn’t).

The prototyping method is often a hard question, like Machining or 3D Printing? But don’t forget the older, shall I say more traditional methods.

CNC is a modern method (that’s also old) because the advances in CNC work continue to improve.  Most people think about CNC with respect to metal parts, but plastic is common too.  The big advantage of CNC is structural integrity of the parts.  If you need to test strength or deflection situations, CNC may be the best option.  Also, CNC is a great choice to combine with fabrication (glueing, welding, etc.), and other methods.  Not everything must be CNC’d perfect. 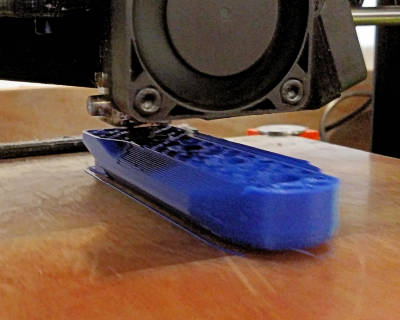 The term “Rapid Prototyping“ encompasses a large group of technologies that create 3D physical parts directly from CAD models on the computer.  3D Printing is becoming very popular because of the speed and accuracy available.  These can be done in almost any shape and can be finished to look exactly like a production part, though usually they are much more fragile.

A whole host of service bureaus have sprung up to meet this need.  3D printing in many forms is popular with ever expanding materials and technologies.  And, availability is also expanding with Makerspaces, Schools, and Libraries making the tech easily available.  For more information, a quick web search will usually yield an overload of information.

Regardless of the method, prototypes are tools:  for learning, for experimenting, for visualization and for design improvement.  Think of them this way, and it will mean more.

Before diving into the prototyping phase, there are few questions to ask:

Depending on the product, a prototype may or may not be necessary — or perhaps more importantly, it may be that only portions of the design need prototyping.  This does not to say prototypes are not important. It’s mention is to emphasize that prototyping is costly in both time and money so the need is worth evaluating.

In many industries the products are quite complex and require several iterations of design, prototyping and testing.  The auto industry, for instance, uses several variations of prototypes to evaluate the design and to find areas of improvement.  In the case of automobiles, the complexity of the design, the quantities sold, and the amount learned in testing from each version easily justify the time and cost.  Another key example from automotive is the amount of testing that happens at the component level. They don’t test the complete new car until the major subsystems are each proven.

A Note About Testing

What do you test?  How much testing?  What kinds of tests?

Most industries have standards to meet or requirements to satisfy.  Certainly testing is to certify or “pass” requirements, but don’t forget testing for your own benefit.  Run tests to verify your FMEA (Failure Mode Effects Analysis).  Every product has some possible failure point.  It may be in abuse or something else, but because it can fail, you must understand it.  Testing to verify failure effects is extremely important.

Test with an open mind.  Testing should be done as realistically as possible, with a mind open to learning everything available.  If the unexpected happens, then you’re learning. If something breaks, it does not mean YOU failed, it means you’re LEARNING. Furthermore, it means you’re that much closer to a better design.

A process to run in parallel with prototyping is Production Quotation.  This is where manufacturer input is requested — both for cost to produce as well as for ways the product can be made cheaper, easier, lighter, faster, stronger and better.  This is especially valuable if the design is in iteration, and that can influence your needs in prototyping.  Use the prototypes to work with manufacturers for the best possible input and prices.

In practice, most products require at least one prototyping phase.  Typically, the flow is from the design phase to prototype and testing then back to design for (hopefully) minor changes before going to production.  The final design phase is much better when it includes information from the production quotation process.

The first speaker prototype turned out well, verifying the design.  Then, a matching prototype was made with very few modifications, and both are in use.  A few improvements for ease of assembly were identified, so some minor changes were made in the design, then plans were set for sale.  Those plans are currently available on the Mechanical Elements website.

Really, the Design, Prototyping and Testing steps of the Product Development Process can blur together as one with learning and insight coming from all these tools.  One process feeds the next as iteration perfects the design.  The final stages of both design and prototyping (especially the final stages) are most effective when they include input from manufacturing.

Whatever the product, if it is to be sold, it will need to be produced, and that involves the next step of manufacturing.  Our experience has taught that involving possible manufacturers early in the design & engineering phase and especially through the prototyping phase(s) makes the transition from design to production much easier, faster and smoother.  I suppose many people don’t think about using prototypes this way, but it is really a powerful tool — and it’s almost free if you use a prototype that has already filled its need in testing or display.

Next Up:  Step 6  –  Production Details and Production

Steps in the Process: