The Flag They Said Wouldn’t Fly 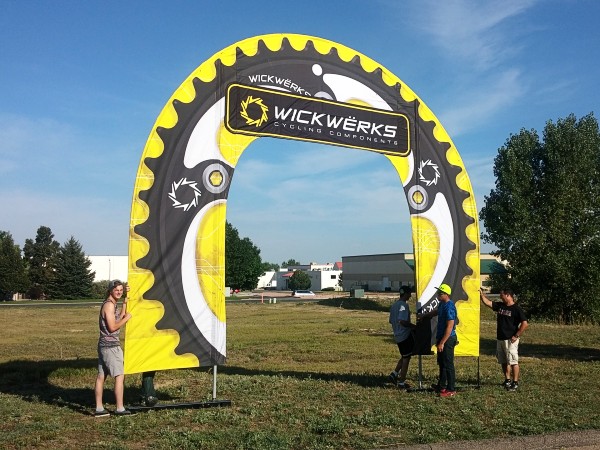 A flag — Well, a banner — No, a Course Feature.  A landmark?  OK, we’re not sure sure what it is, but it was created by Synthesis for WickWerks as a promotional piece to be used at Bicycle Races like the US Open of Cyclocross and CrossVegas.

The goal is a feature that is not like others, and something to attract attention in a positive way.  Ads are a common way of marketing, but we want something different, something that feels like a contribution to cycling.  We also want something to enhance “fun” at the races.

Something over a race course is not new, but the simple stand and sewn flag is certainly different.  The unique parts of this feature, from an engineering perspective, are:

First, the stands with the very simple assembly and the way the legs bind in the supports for super stable and secure support — held together by just 2 bolts (one on each side). (Makes for easy assembly and take-down.);

Third, the simple twin uprights that hold the flag and the guy-wires, but don’t really attach (except at the base);

Finally, it has a bungee cord around the interior perimeter to tension the fabric against the “fishing-pole” exterior.

Several companies we approached about getting it made said it wouldn’t work.  They said it couldn’t be done that way and it would just be a hazard.  We’re very thankful to Omni Promotional in Denver for believing in us enough to try it.  They too had doubts, especially when we showed up with the long flexible rods. Yet, they were willing to give it a go — and look what happened! 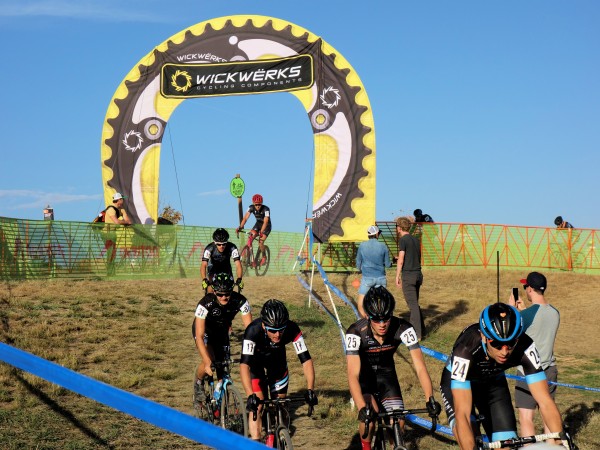 The chainring flag has been in action at several races already — with many more to come.  This photo shows the men’s pro race at the US OPEN OF CYCLOCROSS held at Boulder’s Valmont Park in October 2015.  The flag (if you want to call it that) was a great success because it became a landmark in the venue for those two days.

So, it stands tall even in a light wind.  It is rock solid stable when the feet plant firmly, and it has flown as a landmark at several bicycle races.  Mostly Cyclocross. Racers like it, and it’s easily visible as a promotion piece from across most venues.

The race announcers like it because it gives a great point of reference as they describe where the riders are the on course.  A success on all accounts.

One other great feature is it all folds for travel.  Everything goes in one rubbermaid bin except the poles and stand bases.  All of that stuffs fits nicely in the truck for travel.  What’s big is small, and then great big again.

Out-of-the-Box thinking again.  And, engineering mixed with marketing as part of the Full Service action we offer.  The flag design represents much more thinking and creativity than first meets the eye — as a balance of needs for artistic presentation, portability, weather, stability, manufacturing hurdles, size for storage, and cost.   Plus it’s different, and people notice it.  The design, especially of the bases (not shown), represent an elegant solution that’s all Part of the “Synthesis”.

When you want something different, something to stand out, something to set your company apart, think about engineering design with Synthesis.  This flag is just one of many examples.  Check out the long list of patents we’ve been instrumental in achieving.  That’s the way we think, and it’s what you get when working with us.

Note,  The Patents we’ve been fortunate enough to work on are a reflection of creativity and innovation, but most things, like this flag feature, don’t get a patent.

We are in Colorado Springs, yet we serve the world.  What has you up late thinking about?  What kinds of product development does your company need?  Maybe a creativity injection is just what your company needs to bolster the business strategy.

While we didn’t set out to make a promotional piece, looking at the needs, and the opportunity at races, this came out.  Let us go to work for you.

Safety On The Ski Slopes . . . The Performance Difference For Serious Cyclists