Years ago, we used fragile prototypes (early SLA) to show concepts and generate better processes.  It was game changing, but mostly in understanding, not in production.  Now, even as abilities evolve, most prototyping continues to represent things to produce in traditional ways — like injection molding, casting, forging or machining.  For these processes, impossible features still constrain.

While that’s still the lion’s share, there are more and more places where prototyping the impossible – even into production – is taking over.  That is particularly true where budgets are large (ex. military aircraft), or volumes are small (ex. custom machines).  And, that’s where we are today.

For a new custom machine we’re building, these impossible features come in handy for some creative 3D parts.  The process for custom machines often includes development phases where the original ideas don’t pan out.  That is most true when dealing with irregular parts where you can’t predict behavior.  While working with them, we gain understanding, which leads to improve the processes. 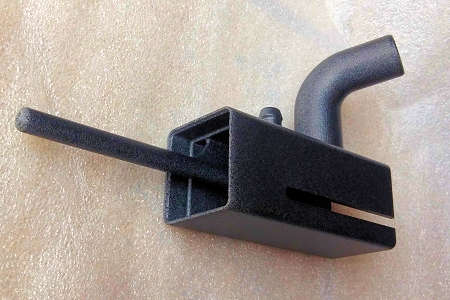 That is exactly the case with some of these parts.  After learning on the spot, the product taught us what to expect, and how to handle it.  The solution brings some changes in the machine, as well as new thinking about some key parts.

The part shown here is a cool example.  Originally it was a welded steel tube — straight, simple, easy — with a sensor port on the side.  Changes for improved machine function require a side flow port and a long entry sensor tube.  While fabrication is one way, instead, we make a single part with MJF (Multi-Jet Fusion) to include all the function.  And, it works like magic.

From a construction perspective, there’s nothing impossible in this part, yet building without 3D printing is much more of a chore.  Prototyping makes it quick, easy and much less expensive than fabrication.  That’s a big plus.

Prototyping The Impossible, Is Possible

For another part, prototyping features that are impossible with most methods, comes to life easily with 3D printing.  The part spirals around a motor body (see photo below), and includes slots to capture the band clamps.  The internal flow areas, ribbing and slots come in perfect — just like the artistic 3D Cad model.  (While the intention is not art, it does have an artistic flair.)

The fun part?  These complex features make assembly and setup a breeze, and they function perfectly.  They add a pretty simple function into the machine where space is tight.  By allowing the flow to spiral around the motor it gives access at the point of need, and clearance for other component motion. 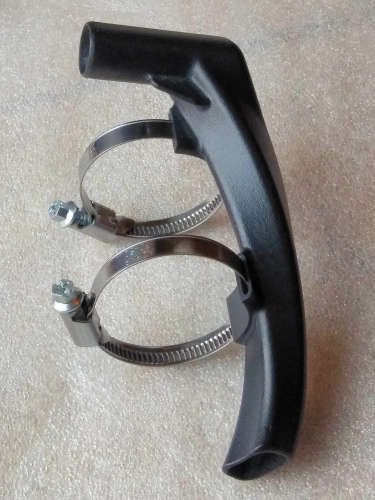 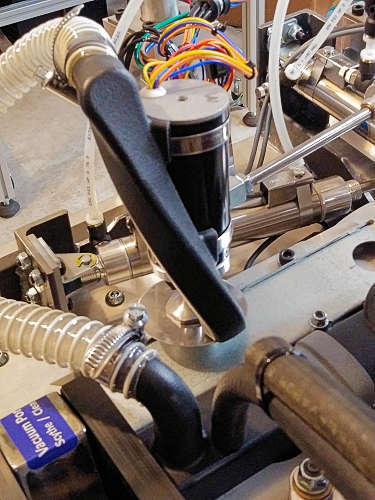 The material is superb, and this will function with the machine for years to come.  It’s strong enough, and stable enough to perform it’s duties long term.

Add this to the “Why do we make prototypes” list.  These are full production tools, but we call them prototypes because they exist only once, and the build is 3D printing.

We’ll add impossible features as a powerful advantage for using the rapid technologies of “3D Printing”.  On the one hand it’s amazingly complex, and on the other, it’s simple.

Think about how you’d make similar parts if 3D Printing was not around.  To our thinking, this is a lot more complex to make with sheetmetal or other plastics.  How would you make it?

For this application, prototyping the impossible is the Elegant Solution.

For the aircraft industry, military aircraft in particular, we have created some really crazy molds to make complex parts.  Some large, some small.  Today, those crazy molding skills are not as needed.  When it comes to complex parts, now we just print them with whatever details they need.  It’s easy to make some areas thicker, some thinner and never worry about the mold shrink, draft release, or other traditional mold issues.

Are they as strong?  No, but they do well.  Information from vendors varies a little, but most say the MJF parts approach 75% of full molded plastic strength.  Some post processing is required for the numbers, but in general, these parts are really tough.  Most important, you can manipulate part design to easily add material where needed, while thinning areas where it’s not.

MJF also has some properties that are valuable in a other ways.  It’s quite abrasion resistant, manifest because it doesn’t like sanding or files.  This resistance makes them great for some places others are not.  It also makes them hard to finesse for fitting parts together.

I admit, using the word “Impossible” with “Prototyping” leads to a misnomer.  Nothing is truly impossible with any of these parts.  While they are pretty cool, they’re nothing like the crazy prototypes others have made. 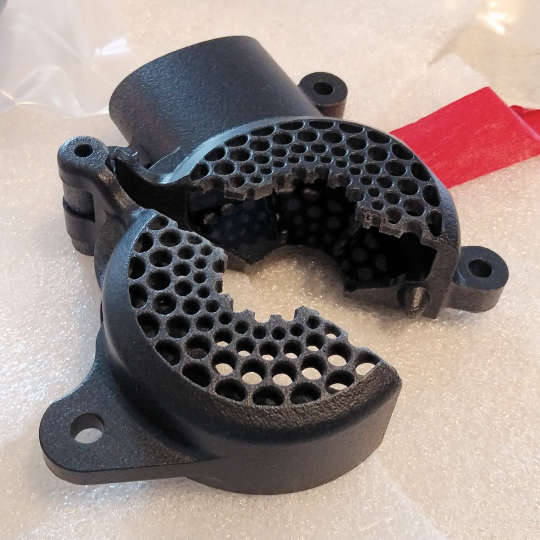 In the past it was much more involved to create such features, and in most cases, building parts similar is a fabrication assembly.  More to the point, if these rapid prototyping methods were not available, we’d use a different thought process entirely for these areas of machine design.

That said, these methods certainly do allow complex geometry to come to life quickly and easily.  And, I might add, fairly cheaply.  Many use it in artistic presentation, and others as show-n-tell.  Yet, as we see it here, the parts are great for functional features.  The machine is production.

The example here is a for a custom machine, yet the process is product development.  I can be one complex thing, like a machine, or a design for an end product to make in the millions.  To us, it’s all part of the excitement in engineering.

Please note that the MJF process and the strengths and uses above are not from a home style 3D printer.  Those have a place, and I have no doubt, as technology advances, that can come as a reality.  But, not quite yet.

For these kinds of parts, we recommend hiring a prototyping facility.  They know their machines, and they can produce such parts in just a couple days.  I think these were 4 days — which includes quoting and express shipping.

There plenty of providers who make prototypes, but watch carefully.  Prices vary a lot.  Maybe they quote less when they’re slow, and more if they’re full?  I don’t know.  Check around.

For further reading, here’s another build method to fit a different need.

Good Luck with your next Prototype Day!

How Do You Deliver Quality? Case Study: Managing Conflicting Constraints

As a customer, how many times have you run into “Can’t”?  As in “Sorry, we can’t do that.”  It’s a disastrous business paradigm, but it is really easy to fix, and it creates sales instead of shutting them down.  It creates happy, loyal customers.  Here’s the pep talk.

How Do You Deliver Quality?

The concepts around Quality are central to a lot in engineering.  We think about quality control in terms of delivering product that meets customer expectations.  In some industries that’s considered in measurables