This is the second part of our Case Study combining Tandem Torsion Axles with a Walking Beam for smaller trailers.  In this post we’ll get into strength with suspension engineering analysis.  Including, a look at the effect of the walking beam mounting on the main trailer frame.

If you’re just joining us, you might find Part 1 as a good introduction to the Twin Torsion Axle Walking Beam Trailer Suspension engineering.  In the first part we mention 5 important design considerations in combining the torsion axles on the walking beam.  The first 4 are the discussion of Part 1.  Then:

5.  With all the load of a tandem axle arrangement focused on one pivot point, how do we distribute load to the trailer frame?

The first of any analysis is understanding interactions, and in this case, calculating forces.  This is a little different than purpose built trailers because it’s only the suspension we are designing.  However, the suspension must mount to a trailer, so we must also consider that important interaction.

For worst case, we’ll use max forces for this Torflex group, 4000# per axle.  From Part 1, we know the axles shift forward slightly with greater load, but at max, the forces balance around the pivot point.

Next, we look at various loading conditions.  Evenly distributed load on a shortish trailer is the easiest case, then gradually more intense for longer trailers.  Yet, the most extreme customer use case is where the loads are in front and behind the axle — like a car carrier.  A car on a trailer places the load at only 4 points where the wheels contact the bed.  We’ll illustrate with this case because it’s severe.

The analysis is not incomplete if we work only to a max trailer load.  What about other forces?  Two stand out:  1)  Dynamic impact loading (bumps on the road); and  2) Braking forces.  Impact loading is transitional and unpredictable — and with a full trailer often goes into momentary overload.  We handle those primarily with safety factors.  On the other hand, we expect brake loads, and we have a pretty good idea of the magnitude.

From a loading standpoint, that’s our starting point.  The images above are the final design, but are grossly exaggerated — 30X+ real deflection — but they show a reasonable result for how things are loaded.  Call it a sanity check.

So, the concept of the walking beam puts all the loading from both axles into one pivot point.  Single point loading usually means either big heavy beams, or dangerously high local loads.  We don’t want either of those, so we must distribute the load to the main trailer frame beams.

For illustration purposes this article uses the 8K Walking Beam and supports because it is much more challenging from a design strength and suspension engineering standpoint.

The first pass at design starts by simply changing the size of the beams to accommodate bigger axles.  In this case, twin 4000# axles (=8000# total max), instead of twin 2000# axles (=4000# total).  The first analysis shows the areas where attention must focus.

In a first design, the Walking Beam components show higher stress than we like, but interaction with the trailer frame main beam is the big story.   Note the high stresses at either end of the suspension mounting.  Though this is an extreme load case, that’s still to high.

After several modifications and the addition of material for support, everything is within the desired ranges.  Changes include:  1) Strengthen the walking beam parts;  2) Spread the forces on the mount and to the trailer frame;  3) Avoid an abrupt transition from suspension to trailer frame beam.  Even the extreme loading case is OK in the new design.

Surprises In The Suspension Engineering Analysis

There are 2 things that came out of the analysis that were a little surprising.  Well, not so much surprising, but different than expectation.

First is the extent to which the load had to be spread to the trailer frame.  Just for kicks, we tried several different beams for the trailer, but more or less, they all displayed similar behavior.  (Overall stress changed with each beam size and type, mostly noticed in the top, but the transition area was similar.)  It really points to the differences in how the suspension mounts as discussed on Mechanical Elements.  And, it’s interesting as we consider Trailer Strength.

It’s worth pointing out that there are some better ways to optimize the design.  However, one of our imposed constraints is to use off-the-shelf material sizes, and minimize the number of material sizes a customer must buy. 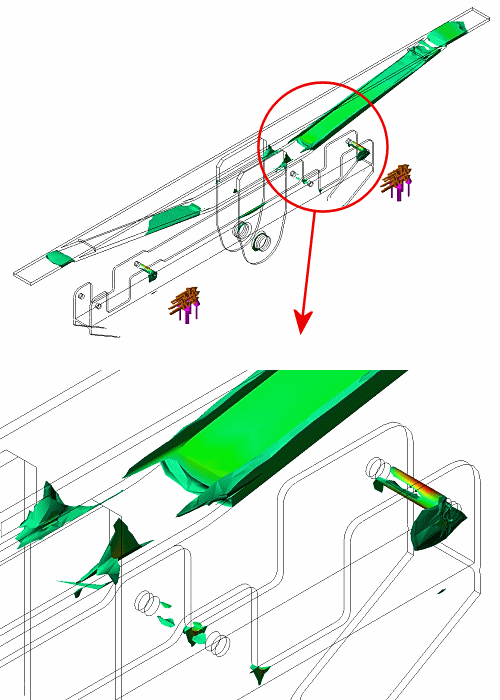 Second is the effect of braking, especially on the torsion axle mounting bolts.  It’s no surprise that braking loads have a significant effect on needed strength, but how that manifest itself in the analysis is pretty cool.  This image shows only the areas of stress above an artificial threshold.  (Threshold picked because it displays nice.)  Everything else is transparent.

In the upper portion (the non-rocking member), note the significantly greater loads in the back (right) portion of the walking beam mount compared to the front.  That is the effect of brake loads, and it’s as we expect.

The detail view (lower) shows the especially high stress in the bolt.  At first it looks bad, but then we realize the steel alloy in a Grade 8 Bolt is several times the strength of standard steel in the rest of the design.  That puts it in perspective, and the bolt is just fine.

And how do we know that’s enough?  That’s where experience and the practical side of engineering come in.

What do we learn from the suspension engineering analysis?