What do you think of SolidWorks?

I’ve asked the question about SolidWorks many times, and the answers are polar.  People love it, or they dislike it.  There is not much gray area.  Why?

Of course, a straightforward discussion of this topic stimulates some emotion.  Any critical comments are not a personal attack.  It is our intent to share findings, and hopefully persuade change.  Also, if you have comments, please leave them below.  Others may share your opinion.

I’ve heard the virtues of SolidWorks for years.  As you know from our Tip of the Month feature of the past we have been an avid supporter (and outspoken critic) of PTC products like Pro/Engineer.  This is not to say we are closed-minded, not at all.  We have been dabbling in SolidWorks and other CAD software for years, but last year (May 2016) we took the big dive and went all in with SolidWorks.  I’m not sure if that was a disaster or a success.  Certainly there are good things about SolidWorks, but the company, Dassault Systèmes, seriously over sells their product. 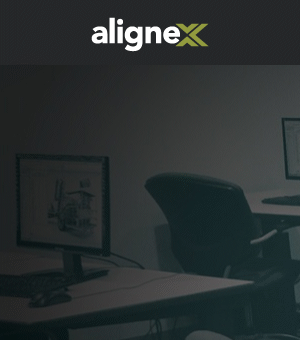 Our shout-out goes to Alignex, the VAR (Value Added Reseller) that provided us the software.  They have been wonderful to work with on many levels:

Good job Alignex.  You do customer service right, and it shows.  You get the gold star.  Thank you!

I recently received the SolidWorks Service Renewal invoice, which gave pause to reflect.  Of course we’re expecting it.  And, I have given it a lot of thought, but I’m not sure what to do.

I am happy with an expanding capability of having SolidWo­rks to offer and Simulation in house.  There are a ton of great features and, certainly, SolidWorks has taken ideas of customizing workspace to a high level.  There’s a quick option for everything.  And, the list of capabilities is long and impressive, if only it would do all those things well.

Immersion is a great teacher.  I purchased the Training Passport and have taken many classes, which were of course, very helpful.  Alignex has been wonderful to work with in training.  I appreciate all the extra helps at lunch and after class. 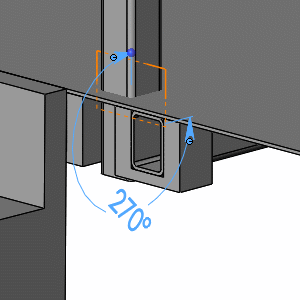 Yet, as we dive in to real projects, we find the software is buggy and not always stable.  We have submitted a few SPR’s, and bumped into limitations because of other bugs already identified.  Also, there is missing functionality denoted by the times we’ve been told . . . Oh, Soli­dWorks doesn’t do that.  At this point I’m grappling with the decision because Soli­dWorks has wonderful potential, but does not perform as advertised.

Here’s a forehead slapping duh.  This is a simple, plane to plane assembly dimension.  At random, during rebuild, the dimension “flips”.  What was 90 degrees becomes 270 or the other way around.  Similar behavior happens at 0 and 360 degrees.  It’s not stable, and everything mated to the parts driven by this dimension then “flips” or fails.  The model must then be constrained again.  It’s just random, but it takes 3 or so minutes to fix again every so often.  How productive is that?

And another one.  Why does the Simulation sometimes fail to recognize a material?  For a multi-body part, after an analysis, when you go back to the model for changes, if you add an additional body, sometimes Simulation it can’t figure out the material for the new body.  Nevermind that you defined one material for the entire part — SolidWorks can’t remember.  The solution is to go back to the model, change something to force a rebuild, then change it back.  Control Q by itself is not enough.  After rebuilding the part twice, suddenly it remembers the material.

These kinds of really stupid bugs have no business in production software.  Obviously, this means SolidWorks does not really care about you, the customer.  They’ll tell you otherwise, but they don’t use the software themselves enough to know it will work for you.  Actions speak louder than words — even in software.

I am convinced that those who love this software are:

We have found it to be a very frustrating experience.  Now In fairness, the other CAD system we have used a lot is Pro/Engineer.  It too has gone through its problems and we have had plenty of frustrations with that.  At this point I am still wondering:  Is there a solution?  Or, do software companies just expect their customers to deal with their negligence and lack of Quality Control?

For more information on this topic read our previous article on software companies and the customers role in quality assurance.

Even with all the great things SolidWorks does, it feels like more of a toy than a tool.  Sure it can do lots of cool things, and it’s awesome to watch the demos.  It can make very pretty pictures, but the amount of effort for some tasks is almost overwhelming.  Even in classes, when diverting from the lesson material, we had issues of large proportion.

Instability and bugs are just the start.  I suppose that’s the nature of software companies trying to release stuff before it’s ready.

In using SolidWorks, the amount of mass movement and interaction from the user in order to accomplish tasks is crazy.  I’ve never clicked the mouse so many times chasing menus all over the screen!  Yes, they have lots of short cuts like pop-up menus that are helpful (though inconsistent), so the workflow does not continue to flow.  You can assign menu items, and icons, but you still have to mouse to them.  You can assign some mapkeys, but many are pre-assigned and you’re limited to 1 keystroke (and it can’t do multiple stacked functions), so mapkeys fail as a real solution.

Various CAD systems have bragged about having less mouse clicks to perform operations, but they fail to report how much distance there is between clicks.  And, in SolidWorks, how sensitive the mouse is to exact position.  (IDK, maybe you just get used to the elbow and wrist issues after a while.)

Interestingly, we have written about mouse interaction before, a long time ago.  We have also written about going fast with CAD and the need for customizable, user defined keyboard shortcuts (Mapkeys) — many, many more than are available with SolidWorks.

Finally, what about the error messages?  What do they actually mean?

Then there are the many UI inconsistencies.  For instance the way the pop-ups operate.  In this example, the pop-up for Sketcher acts different than the pop-up for Mates in assembly. Contextually they are similar (creating connections and interdependencies), but they behave quite different. Why?

Yet another . . . For User Interface, SolidWorks has done a pretty good job with the layout and screen and such, but their messaging is horrible, especially the failure messages.  The warning pops up to tell you there’s a failure, but with little or no indication of what or how it failed.  Click the links that indicate you will get more information, and they go to even less informative messages.

OK, it may be because I’m newer to it, or don’t understand yet, but I rarely get any value from the error messages.  Furthermore, I’m left to try to figure out why or even what failed.  Sure, it shows you a bunch of features in the tree that failed, but mostly there is no indication of what the “root cause” of the failure is.  Hey, if someone knows how to get value from these error messages, please post the tip below.

SolidWorks, if you’re listening, I’ll give you the same advice I gave PTC.  You need to have your developers modeling with the software.  Each Friday have them stop by a toy store, pick up a new toy, then come back to the office and spend the day modeling it.

My guess is, like PTC, the developers do not build models of more than just a few features.  They need to build models with hundreds of features so they can deal with the issues and understand the user experience first hand.  Then, they need to change those model base features to understand the pain of exceptionally poor messaging and problematic issues in dealing with feature failures.  For instance, after a failure, often you just have to Edit the feature, then close it without doing anything.  Magically SolidWorks figures out what to do.  It’s an automatic (manual) fix that should not require customer input.  (See this example too.)  That is a total UI failure in my mind.

Solidworks:  Please focus on the customer experience.  Who cares how many great features the software has if they don’t work properly?  In my view, the only way you can get there, is to become your customer.  You need to use your product in the way your customers use it.  Only then will you understand the pain of sloppy programming and lack of Quality Control.

In defense of SolidWorks and maybe some of those reading this post, several people have said I am a 5% user.  The insinuation being that I use the software more deeply than 95% of customers.  If that’s true I am very sad, because I have not used it in ways I consider super deep.  If in one year I am in the 5% group, that says terrible things about our engineering community and society.  Sorry, I’m not buying it.

I’ll go with the assertion that I am not fully up to speed on everything — that I’m still exploring features so I notice the issues and inconsistencies.  However, that does not explain the bugs and poor user experience.  I find the overall experience pretty disappointing.

Help me out … Is SolidWorks on a dive?  Have they become too big for their britches?  And the immediate question:  Should we renew the license?  Or look for something else?  We welcome your comments.

— It’s time to drive all the new stuff we’ve been hearing about for SolidWorks 2018.  Demos abound, and this is our take on the cool new stuff.  Also, if you’re interested, check out the comparison of SolidWorks vs Creo.

For Synthesis Engineering and Mechanical Elements Please note the following identifier — SYN ENGRNG & ME PLANS — (and those similar) may appear on your credit card statement if you have transactions with Synthesis  OR with our DIY feature, MechanicalElements.com for plans sales.