A ‘Next’ Generation Of Engineers

Very honored to participate with a group of eighth grade science students practicing the engineering and design process with their “Dream Invention” projects.  Training, if you will, the next generation of engineers.  What a great way to learn by doing.

The science teachers at Holmes Middle School in Colorado Springs are putting creativity and forward thinking into student projects.  As part of the class, students work on their “Dream Inventions” while learning the process of design and development.  For feedback, they invited ‘seasoned’ professionals to visit with students, and help them think about next steps with their projects.

Student groups each came up with a problem to solve, then an idea and a prototype of their concept.  These they presented in a pitch of their idea to a “real professional engineer / designer” to ask for feedback.

Though I’d love to tell about the great ideas, that would violate confidence — another important piece for engineers.  Keep confidential ideas confidential.  That said, I can certainly give some generalities to highlight the thinking of this next generation of engineers.

Next Generation Of Engineers – Group 1. 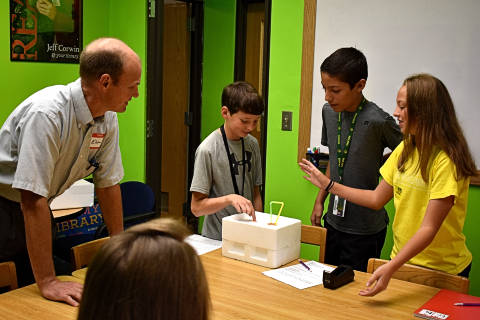 The first group has two relating ideas.  The big one is a wonderful idea for solving some very challenging recycling issues.  The idea is impressive.  Not only the idea, but also their solution.  The actual technology to conquer some of the chemistry specifics is beyond them right now (beyond me too for that matter), yet the approach and the really clever insights toward achieving the goal are super cool to see.

(As a side note, the reflection of their thinking in the way they chose to prototype the invention is great.  I love unconstrained thinking!  Great job with that.)

We spoke about what they see as challenges to doing it, then dropped back to their leading, first invention — something they could actually achieve.  I think they came up with the bigger idea because they thought the first one was “too small” or too simple.  We spoke about that as a thinking error, because some of the greatest inventions are pretty simple.  Look at the wheel, for instance.

Next Generation Of Engineers – Group 2. 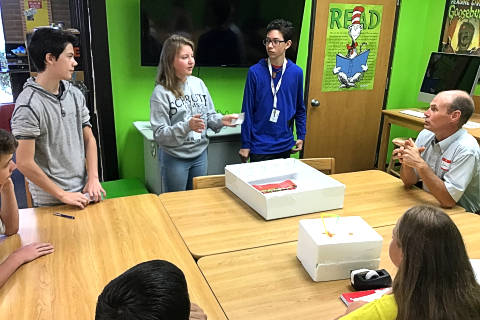 Next up, the second group chose technology to solve a lunchroom problem that has been around since the beginning of school lunch.  First of all, it’s impressive that they see the problem as something to solve.  Secondly, they decided to solve it with a multi-pronged approach — a higher order of creative solutions.  Their idea is not just a band-aid, and it’s actually good enough and helpful enough to actually implement.  IMHO.

We talked about challenges, cost constraints, reallocation of resources and some other practicalities.  The truth is, their idea would not be that difficult to implement.  They pointed out several things.  Great thinking.  There are some hurdles, but it seems both reasonable and feasible.  Great job.

If a couple hours of visiting in a middle school science class is any indication, we have a lot to look forward to with the next generation of engineers, scientists, and inventors.  I am also very encouraged by the teachers (and administration) and their willingness to step outside the normal boundaries for the kids.

Many believe you can teach creativity, including many university professors.  Why wait?  They’re doing it in Middle School right now under the umbrella of teaching the engineering process.  Thinking about the ideas in an unlimited form builds creativity.  Thinking through applications of their ideas brings a touch of practical engineering — which at this stage is less important.  Anyway, the exposure will certainly help them in the future — no matter what career path they choose.

Thank you for the invitation to participate with this awesome new generation of engineers!

Inventions That Didn’t Happen How Do You Know Who To Believe?

Why Do We Make Prototypes?

It seems like a lot of work and cost to build a prototype — and perhaps a big unnecessary step.  Why not just do the design really well, then send it to production?  Why make prototypes?

Vultures in the Patent World

You’ve seen them — industries that feed on the success or misfortune of others.  “Ambulance Chasers” are probably the most famous, but it’s in the patent world as well.