A few years ago, there was a terrible accident involving a single motorcycle traveling on the freeway.  The cause listed in the police report:  Engine & rear wheel lock-up. Shortly after the accident, Synthesis was contacted and asked to perform a mechanical forensic analysis to determine the cause of the rear wheel locking. 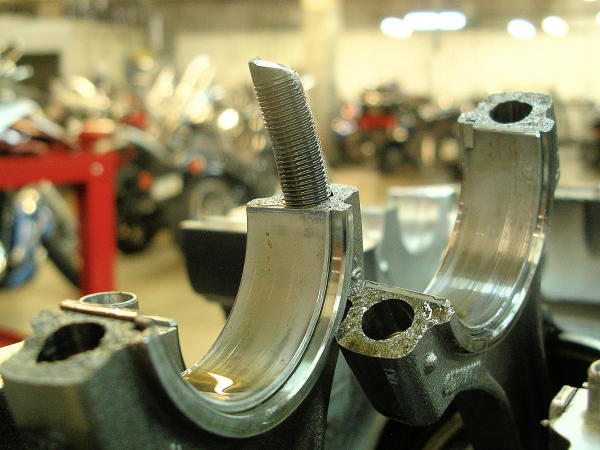 The case was not straightforward.  Though the motorcycle was pretty new, it was equipped with some factory performance parts installed by a dealer.  A lawsuit put the dealer at odds with the manufacturer in resolving blame.  Was the accident a result of a manufacturing defect?  Or, was it an issue with installation of the performance parts?  Then, it could be something entirely unrelated?

Synthesis was contracted to be the unbiased voice, to perform a mechanical forensic analysis and to work with all the concerned parties in finding the root cause.

We had the bike delivered from the police impound to an uninvolved motorcycle dealer, where it would be torn down in an open meeting of all involved parties.  I was impressed with the group that came.  I’m not sure exactly what I expected, but a real tone of concern filled the conversation.  Everyone there was professional and polite.  There were representatives from the manufacturer’s engineering and legal departments, from the involved dealership, and from the plaintiff.  All were there to oversee the tear-down and failure analysis. 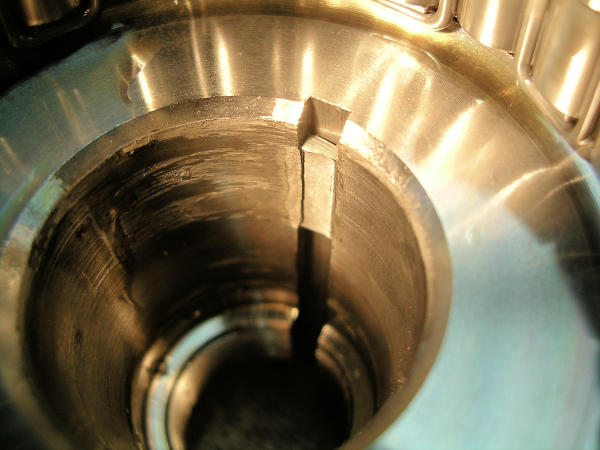 The tear-down proceeded by consent.  We stated what we were going to do in each step, asked the group if they agreed, and if they were ready.  We then proceeded.

As each step unfolded, everyone photographed what they wanted, asked questions, et cetera.  Forensic analysis is a meticulous process, which needs a very thorough eye.  Surely it is the slowest tear-down that mechanic has ever done.

The first steps verified that there was metal debris in the oil, both aluminum and steel.  Debris of all different sizes.  Oil was present, fairly clean, and in what appears as adequate quantity.  No parts were missing either.

The clutch was still operational and did indeed disengage the driveline from the powertrain.  (For some reason, no one had tried this.  The police cut the drive belt to move the motorcycle, though simply pulling the clutch lever – as damaged as it was – would have released it.)

Side Note To Think About:

I am an experienced motorcycle rider.  As such, I’ve experienced emergency situations, like having a rear wheel break traction at high speed in a corner.  Never a lock-up, mind you (except deliberately in performance riding classes).  However, if the rider of this bike had simply pulled in the clutch, he would have coasted smoothly to a stop rather than spending weeks in the hospital, and years healing.

This doesn’t change the fact that something went terribly wrong inside the bike, yet it does emphasize the need for education and riding skill.  If you ride, please, learn how to handle emergencies.  I recommend performance riding classes. 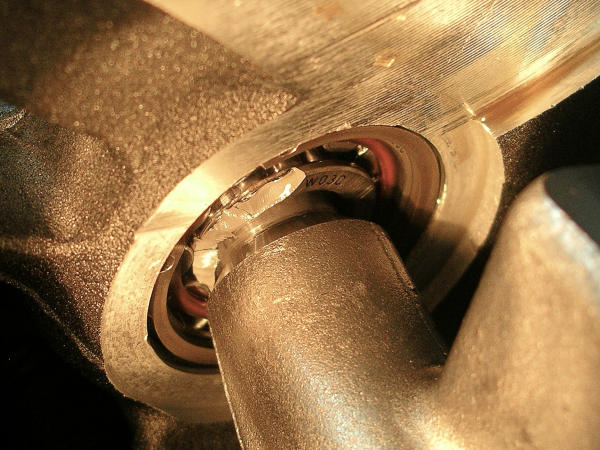 The next step in forensic analysis focused on the transmission and the engine top end.  Still nothing, so we pulled the motor. As we began to take it apart, we found a gear that didn’t quite align, and a shaft that showed distress.  We found catastrophic failures like a shaft key that sheared right in half (shown in one of the images), and bolts that had broken. Now we were getting to something.  After several more steps, we finally split the case and found the pieces that locked the engine.

Of course, there was a bit of excitement in the air.  Now we could see how it stopped, a violent, sudden stop.  And the head scratching of “why” really began.

Through a process of analyzing the various witness marks, looking through the debris and deductive reasoning, we came to a thesis about what happened.  A theory of unfortunate events, but the theory did not give an absolute answer to the root cause “Why” question. We needed some additional information.

Next stop, the metallurgical lab. 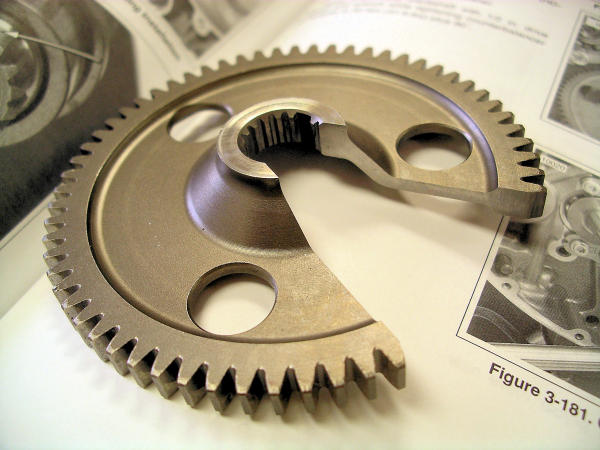 As a final step in determining the real root cause, we got a little more personal with some key parts.  At the metallurgical lab we were able to section a couple key parts to see what was inside, and to measure metallurgical properties.

The failure analysis was fascinating — actually, forensic analysis in general is intriguing. I wish I could talk more about details and show lots of photos, unfortunately, that is not appropriate.

Suffice it to say we found the cause.  It certainly ended as a sudden failure, but it was some time in the making.  The witness marks told a story of thousands of near misses before finally failing completely.  As with many aspects of engineering, there were several factors that all came together just wrong. 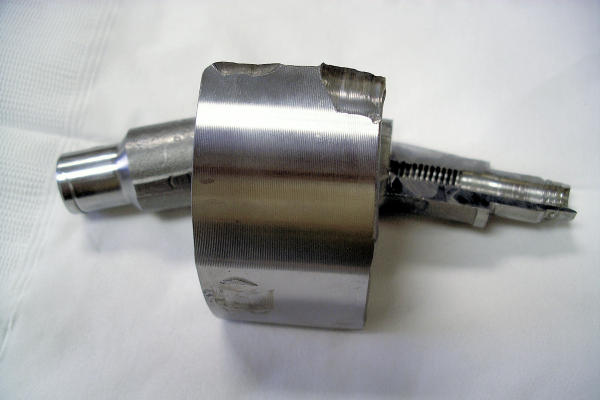 Our job in forensic analysis is to pull the tidbits of evidence together, then recreate the story of how the events unfold, leading to the final tragic result.  Failure analysis is going back to find the real root cause.  It is to tell the story of what happened to start the chain of events.

In this case, like most cases, the evidence did not immediately point to the cause.  This motorcycle had a lot of damage inside — most impressive occurring immediately before or as a direct result of the final engine seizure.  It is important always to follow the chain in determining the cause.  That takes a diagnostic skill, an attention to small details, and a mind to pull it all together. These are skills we offer.

Well, I can’t just leave the story hanging like that, so here’s what I can say.  The engine stopped suddenly because the balance shaft interfered with the crankshaft.  This is an event considered mechanically impossible.  Direct impact brought the engine to an immediate and violent halt, which bent shafts, broke bearing races, sheared keys and much more.  It was sudden, violent, and final.  Yet, the cause was not in the sudden destruction, it was in the small details elsewhere. 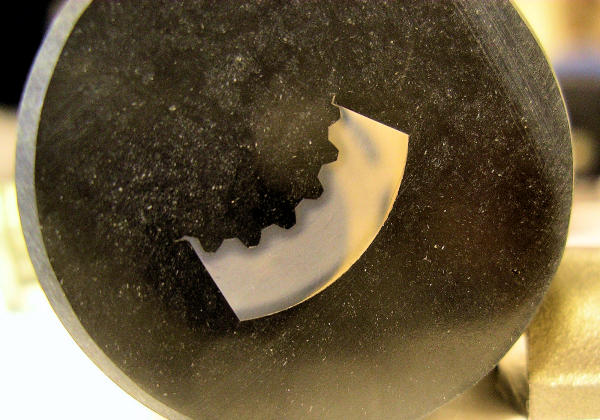 That said, this is just one area of Engineering Consulting we do.  If that fits your need, please consider Synthesis as you evaluate and seek the right engineering consultants.