As a follow-up on bicycle helmets and safety after talking with several manufacturers at Interbike 2017, here are a few highlights of what I saw and learned.

“What do customers want in a bicycle safety helmet?” Ask this question of the manufacturers and they will tell you sleek design, aerodynamics, colors, air flow and other things.  We like these things too, but interestingly, “Safety” was not in the list of the manufacturers I asked.

Ask the question “What is your company doing to increase safety in bicycle helmets?“, most give a rather perplexed look.  After giving themselves a few seconds to compose, they all mentioned passing safety standards, and adding MIPS.  Most of them dodged further questions on this line.

These 2 questions and the respective answers are eye-opening.  They shouldn’t be, but reactions to the second question particularly show that “safety” is not an important part of the discussion.  Yet, it’s the main point of putting the helmet on your head in the first place.  It seems the distractions of style have moved the conversation away from that main point.  Why can’t we have both increasing safety AND great style?  Of course we can, we just need to focus on it.

MIPS was a prominent feature in nearly all the helmet displays at Interbike.  Both MIPS, and all the marketing to support it.  I don’t wish to belabor the point, but I did have some very interesting conversations.

On asking, nearly all said how great it was, but again on asking, nearly all agreed there is no data to demonstrate it or prove it.  Goes to show the value of a great advertising campaign.  If you say it enough, then people eventually begin to believe — even if there is nothing to substantiate it.  This is certainly the case with MIPS.  To me this is a very scary situation when our safety is concerned.

As I spoke with some of the manufacturers, I gave an example of where having MIPS can actually cause greater injury, and the surprised looks were priceless.  Of course, I am not the expert and I have no more data than MIPS.  It’s just funny that they have not thought it through.

Note:  After wearing MIPS for a while, the MIPS layer now sticks in the helmet rendering it useless.  See more at the end of this article.

As a side note, it occurred to me that the perfect implementation of MIPS is on the outside of the helmet, rather than on the inside.  If it were the outermost layer, it would do exactly what they say it should.  It would also be completely independent of the impact protection layers of the bicycle helmets.  This sounds to me like an invention in the making.  Something to think about.

In other news, there was a lot of mention of the Virginia Tech Studies on Football Helmets and how that rating system is fundamentally changing how they are being made.  (Search it out and read about it.  It’s good stuff.)  A few of the manufacturers I spoke with had high hopes that this kind of thing can happen in the bicycle world too.  I agree!  Yet only 6D said they are willing to jump in full throttle.  Others seem like they are waiting for a push into it.  Turns out that a lot of the 6D technology and improvements come from learning from football and motorcycle helmets anyway.

I also had a great conversation with Smith.  We talked about Koroyd and how they are looking at many different variations for optimization.  I am impressed by the story of experimenting their way into the current configurations, and also where they see opportunities for greater safety.  They also come to bicycle helmets from a broad background of various helmet applications — mostly ski and snowboard.

Smith also shared some of their vision for the future.  I hope they can do it.  (I’m not at liberty to share that.  Sorry.)  Yet, I mention it because the only folks that were willing to even share the fact that they have a vision for improving safety were Smith and 6D.  Oh, and another small Startup group that was showing something they hope to one day produce.  I wish them the best of luck.

Please understand these comments about company vision are simply from conversations at the show.  I did not talk with the executives of all these companies, and many of the big players are not represented.  Take the comments with a grain of salt.  I’m sure there is a lot more happening in the engineering departments than I was able to get wind of.

So, going back to Part 1, this study was started by simply wondering “What is the safest bicycle helmet?”  We learned that it’s not just the helmet design or even the technology, but also how we use the things we have.  A typical helmet is less safe by wearing it improperly or by adding things to the exterior.  Something that makes perfect sense, but I had never really thought about it.  Then there’s the legal garbage that has stifled the pursuit of better safety in bicycle helmets.  (We won’t go into that again.)

Our search became a lot more involved as various technologies were explored (see Part 2).  Now, it’s the end of the practical study.  We’re certainly not experts, but we’re learning a ton.  Of course, if someone wants to hire Synthesis to assist in developing more and safer technologies we are open to that.  However, for now, this is sufficient for bicycle helmets.

In my mind, 6D and Smith are the 2 front runners in pursuing safety.  They present Safety as part of the story in their company branding, and they have the right attitude.  —  They believe we can do more, rather than just designing to some arbitrary testing standard.  Congratulations to these two companies.  I hope they can lead a stagnant industry on to doing great things for cyclists everywhere.  New technology exists, I’m sure of it.  Let’s embrace the vision.

Please feel free to continue this conversation by leaving comments below, or by writing to us directly.  Just put “Bicycle Helmets” in the subject.

I have worn the 6D Trail helmet for mountain biking for a year.  For bicycle helmets, it’s a little heavier, and yes, it’s a little warmer on hot days, but I still feel strongly that it’s a safer helmet.  I have not tested the safety in a big crash, and I hope it does not happen, but I feel the 6D will do better than any previous ones I’ve had.

Secondly, I also purchased a Smith for road and CX.  It’s a lightweight and the Koroyd has not bothered me with ventilation.  For me, the added safety of the Koroyd is nice, and it’s a great helmet.

As a  side note, all the Smith bicycle helmets available at the location of purchase had MIPS.  I bought it anyway, and now, after a few months of use, the MIPS layer does not function.  It appears that sweat has glued it in place and it is non-functional — which is good for me since I don’t believe it had value anyway.  So much for all the advertising claims.  On the other hand, the 6D Helmet still has the rotational protection that MIPS promised — no compromise even after more than a year of sweating in it. 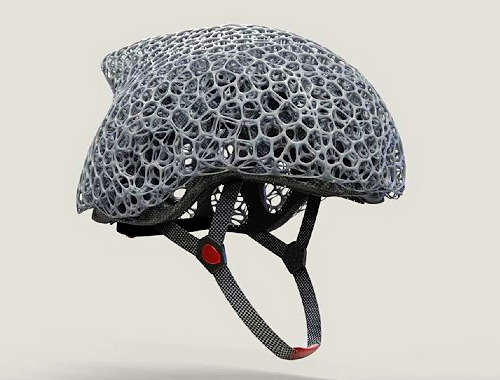 Just ran across this helmet photo at Cycling Industry News.  It’s a concept (as far as I can tell), from Voronoi, but read the article for the details.  It’s worth the time.

Definitely a different approach — and an intentional approach.  I like intentional innovation.  This helmet is not just another attempt at a similar thing, it’s a stretch of technology as well as expectation.  Good Luck to you, Voronoi, with all the work and testing to bring this to market.  This is interesting to watch — to see where it goes.

Part 2: Technology For Bicycle Helmet Safety The ‘New’ of Solidworks 2018

What Are We Learning In COVID?

With every adventure, it’s a good idea to look at what we are learning, to manage our failures, then direct our future toward success.  Some say that’s not so with things largely out of our control (like COVID), but there are always things to learn,